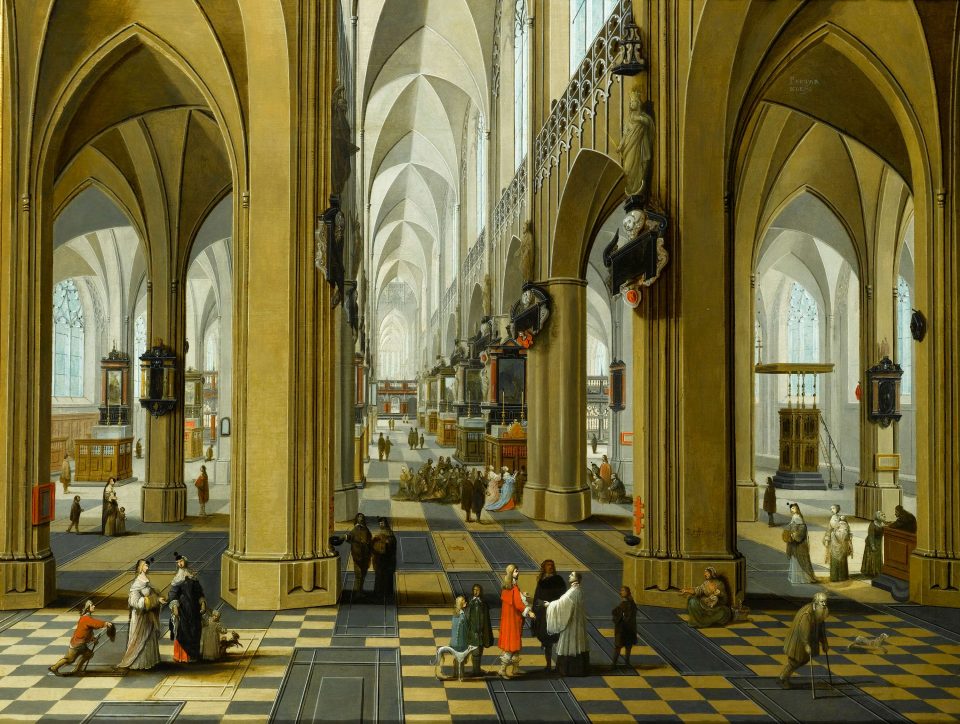 Pieter Neefs (1578?-1656?)was the son of an Antwerp cloth merchant and innkeeper. The year of his birth is uncertain, being placed between 1578 and 1590. He became a specialist in church and architectural interiors, a subject that was little practiced in Flanders at this time. A well-known device of his was to depict church interiors at night, lit only by a few light sources and thus very atmospheric. Often the churches are imaginary, at least in part, being loosely based on real buildings but with added elements. In the style of the time, the perspective is a key part of the composition of the picture, being drawn in rigid lines and diminishing all the way to the back of the building. In this particular painting, if you zoom in you can see that the figures were painted in over the lines of the paving stones. In fact, some or all of the figures are painted by a different hand – that of Frans Francken the Younger (1581-1642). He was a talented Antwerp-based painter mainly of small historical and biblical scenes for cabinets. He was frequently asked to paint in figures for fellow-painters who specialized in architectural or other subjects.

Pieter Neefs was successful commercially, yet appeared to have financial difficulties, perhaps because he had a family of six (five children and a wife), plus servants to support. Two of Neefs’ sons also became painters and their works are sometimes hard to distinguish from those of their father.