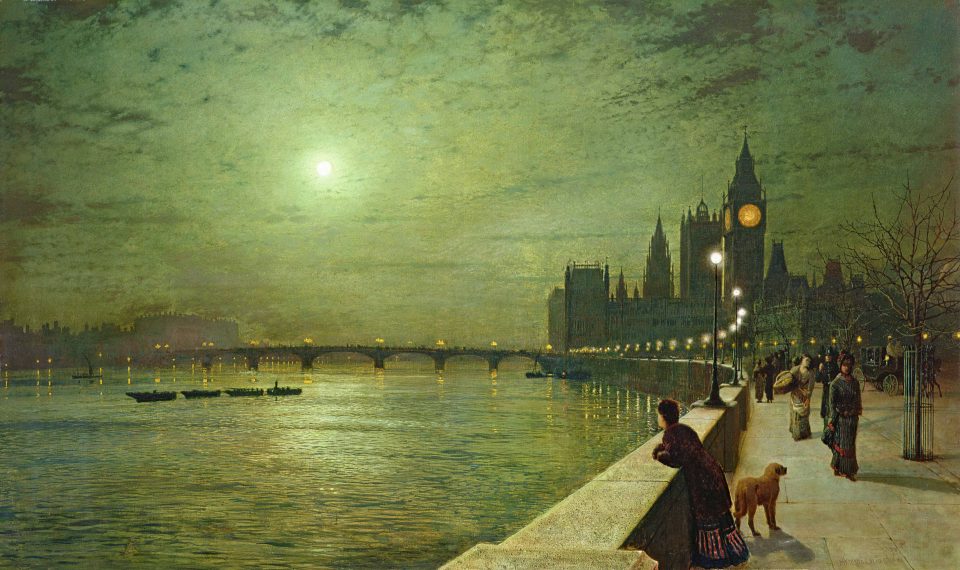 John Atkinson Grimshaw (1836-1893) was born in Leeds, and although he lived in London for a while as a painter, he stayed true to his Northern roots and returned there in later life. He began his working life as a clerk, but, to the consternation of his parents, left this job to be an artist. Happily, he achieved considerable success and popularity.

He was greatly inspired by the Pre-Raphaelite style, painting scenes in vivid detail and with accurate colour and lighting. He was skilled at capturing seasons and types of weather, and is especially known for his moonlit views of city and suburban streets and of the docks in London, Leeds, Liverpool and Glasgow.

His “paintings of dampened gas-lit streets and misty waterfronts conveyed an eerie warmth as well as alienation in the urban scene” says Philip J. Waller in Town, City, and Nation, and there does seem to be a mix of sadness and loneliness alongside the beauty in many of his paintings.
In the 1880s, Grimshaw’s studio was near that of the artist James Abbott McNeil Whistler who was also fond of painting foggy urban scenes by moonlight. Where Whistler’s style was impressionistic, Grimshaw’s was photographically realistic, recording “the rain and mist, the puddles and smoky fog of late Victorian industrial England with great poetry” (Lionel Lambourne, Victorian Painting). After visiting Grimshaw, Whistler remarked that “I considered myself the inventor of Nocturnes until I saw Grimmy’s moonlit pictures”. To see one of Whistler’s so-called Nocturnes (atmospheric studies of cities), click here.

In this painting of Westminster Bridge, we can see the Thomas Page-designed bridge with its seven arches that still stands today. In another painting on this site, “The Last of Old Westminster” by James Abbott McNeill Whistler, you can see the previous bridge being demolished.