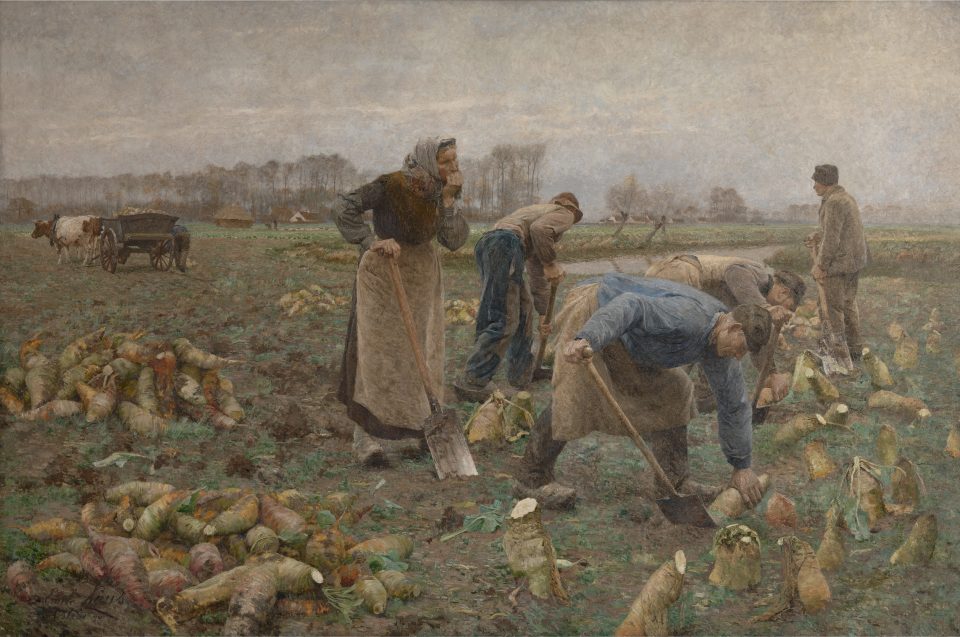 Emile Claus (1849-1924) was born in Belgium, the 12th of 13 children. His father was a grocer, publican, and town councillor, whilst his mother came from a sea-going family. As a child, Claus showed a love of drawing and studied art at a neighbouring town academy. However, his father sent him off to Lille in France to become a baker, no doubt believing this to be a better bet than the life of a painter.

Claus eventually persuaded his father to allow him to study art in Antwerp, and soon prospered, becoming something of an artistic celebrity and rubbing shoulders with several leading artists of the day such as the sculptor Rodin. Claus began to change his style from a naturalistic, realistic one, to a type of impressionistic style called ‘luminism’, so-termed due to the bright and luminous range of colours he used. He founded the society Vie et Lumière (Life and Light) and became known as the ‘sun painter’.

This 1890 painting, ‘the Beet Harvest’ is gigantic, and was never sold in his lifetime. It shows the land in the grip of winter, farmers hacking sugar beets from the frozen ground, and the signs of the grueling toil etched into their faces. On Claus’ death, his widow donated the painting to the city of Deinze on condition they built a museum to house it, which they did.

Other paintings by Emile Claus