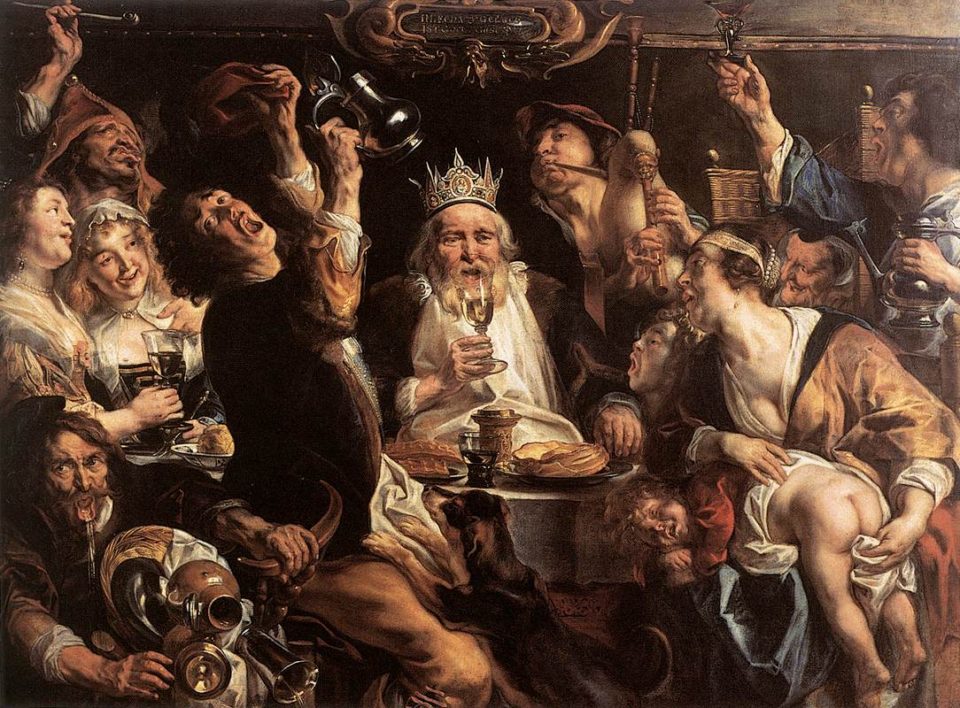 Jacob Jordaens (1593-1678), son of a wealthy linen merchant, was born in Antwerp, the first of 11 children. His earliest training was as a watercolourist, and he went on to be a prolific tapestry designer, painter and printmaker. He excelled in portraits, scenes of everyday Flemish life, and religious themes. At the time it was fashionable for aspiring artists to travel to Italy to study art, but other than making a few trips to the Low Countries, Jordaens remained in Antwerp his entire life. He’s best-known for his depictions of Flemish proverbs and traditions.

This painting is a typical and boisterous example. In Flanders, Epiphany (January 6th) is much-celebrated with food, wine and merriment. One person is crowned king for the evening and is waited on by his ‘subjects’. This packed scene features much to capture the eye. However, Jordaens evidently didn’t approve of the roistering behavior he depicted, as the picture carries the motto ‘Nothing seems more like a madman than a drunkard’.

Jordaens died in 1678 of the mysterious Antwerp disease, which seems to have been a version of the earlier English Sweating Sickness. This disease, the cause of which is still debated, killed in a matter of hours. Reportedly you could have eaten a hearty breakfast and be dead by supper time the same day, such was its rapid and fatal grip.