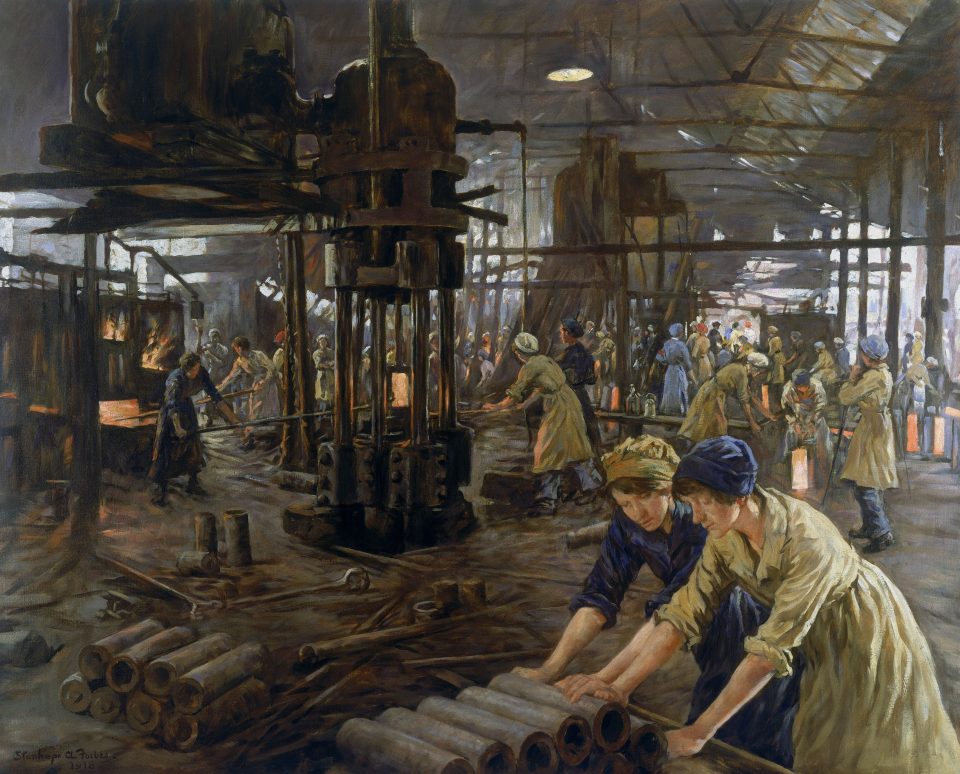 Stanhope Forbes was the son of a French mother and an English railway manager. He trained in London and Brussels, and then travelled to France and Brittany in 1881. There he met and was much-influenced by ‘plein air’ painters (painters working straight from life, out of doors). He was adept at capturing domestic scenes in a sympathetic style, and could depict lighting effects with great subtlety.

He was a founder of the Newlyn School of Painters, an artists’ colony based in Cornwall who specialized in everyday scenes painted from life. Forbes was commissioned by the Steelworks John Baker and Co to paint this scene of women working on the shopfloor, making munitions for the war effort. As with many steelworks, John Baker and Co had converted to munitions manufacture for the duration of the First World War. As men were drawn into the conflict, women took over their jobs for the first time. So unique was this that war artists were asked to capture scenes not only at the battlefields but on the homefront too. Poignantly, Forbes lost his son, Alec, to the war in 1916.

Munitionettes (women munition workers) handled the extremely toxic and dangerous explosive TNT and this turned their skin and hair yellow, leading them to be dubbed ‘canaries’. Canaries suffered long-term health consequences of their war work, and in addition there were multiple fatalities when munitions spontaneously exploded on the factory floor.  Although the work was hazardous it attracted many women into its factories, due to the far better pay offered than life in domestic service. As a consequence of these and other opportunities for women, historians tell us that domestic service never recovered its grip on the employment market.